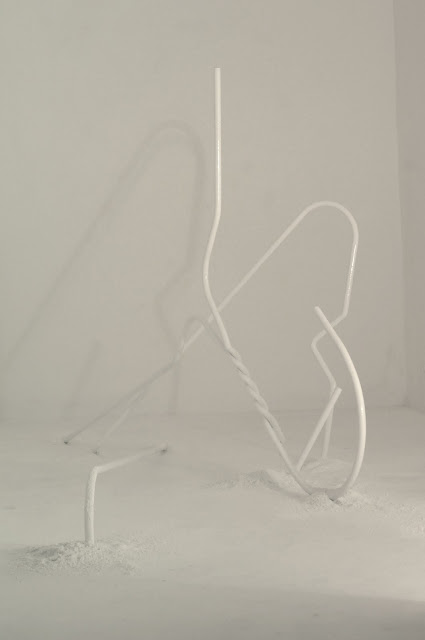 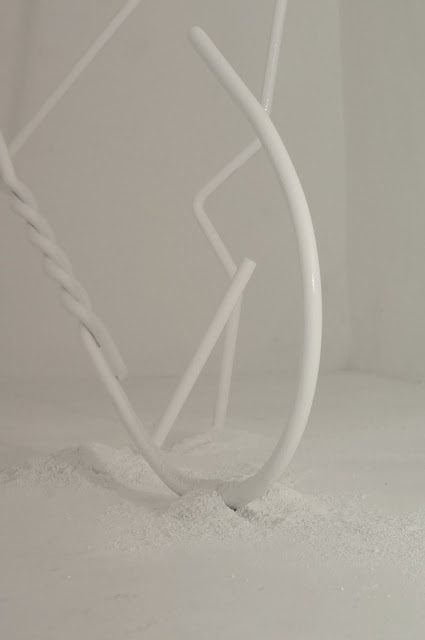 “CAMBIO DI STAGIONE… A QUANDO?!”
the installation of Massimo Palumbo

On Thursday November the 3rd from 6.30 pm at the Galleria Opera Unica in Rome it will be possible to see the installation of  Massimo Palumbo “... cambio di stagione A quando?”.  The artist intends to express a necessary if not indispensable social change in a provocative and ironic manner through the use of an ensemble of hangers, simple material of everyday’s use. Thus, art comes into close contact with society. It is from a consideration of this material that the installation emerges and with which it interacts heralding a message of renewal. This renewal is attained through the artistic language expressed by Palumbo with simple material put together “aiming to a refined and experimental search that can be assimilated to a thought developed within the  Arte Povera and Minimalism movements (Cristina Constanzo, historian and art critic). The use of simple material is a continuous in the art expression of Massimo Palumbo that emerges from an ethical message aiming to denounce today’s society based on consumerism:  in a world that continuosly instigate to buy objects destined to become obsolete, soon forgotten and disposed. Palumbo opposes this trend by recovering and assembling those objects to dignify them bestowing new life even to objects apparently destroyed, because “nothing is destroyed”.  At this point we ask ourselves whether the objects are more useful when the are new or when they are destroyed but recovered by Palumbo for his art work.  It will be interesting to ask now on the notion of usefulness. While Massimo’s choice of white in his work reflects the will and the search for an alternative to this society that is more and more arrogant and loud, he opposes the elimination of the superfluous; demolishing to reconstruct, basic assumption of post-modernism.  Palumbo wishes to express the need to deprive, subtract in order to reach the essentiality. Essentiality that has an ethical purpose, not merely aesthetic, in a mutual dialogue between art and society.  Everything must have a sense, deliver a message that allows a collective advancement. The relationship between art and society and the need to confer a meaning is reflected also in Palumbo’s urban sculptures like “La fiamma del carabiniere” a monument in Piazza della Liberta in Latina a memorial to the dead of Nassyria.  The bend-shape of the sculpture express the meaning that Palumbo wishes to convey:  underlying that, first of all, behind the military uniform there is a human being that is often forgotten. The preference of Palumbo for diagonals, for the off-centered both in large and small work is born from the desire of an anti-Monumentalism. (Laura Cianfarani)
Francesca Piovan critic and art historian writes on “…cambio di stagione A quando?”:  A simple clothes hanger belonging to everybody’s ordinary life and therefore assimilated by common perception, occupies the space, potently modifying it and occupying it. An object of everyday use, light and thin, becomes large and powerful like a message within the fragmentary disjunction of its original form and in its subtraction from the context of its use.  In this way Massimo Palumbo puts on the scene in our historical time unusual actors being them metal sheets, steels, chalks, woods. In this way the artist shapes and gives strength to his ideals, transforming them in questions and provocations, flavoured with healthy satire, unquestioned prerogative of the Italian people. And on the stage of this uncertain ”today”, hesitant in the far-sighted projection of the inconsistent “tomorrow” the blinding and pure White of  Massimo Palumbo seems shouting, imploding, while invoking listening, help, rescue. Therefore, the artistic creation assimilates the current historical period, it crystallises it, renders it visible and liveable, and is able to provide synthesis and structure to an ancient concept, never appeased: the change, the evolution that opposes the stagnation, the social stasis and inaction. The work of Massimo is interrogation and assertion, solicitation and sarcasm, it is provocation and stimulus, a verbal message and material assessment, it is logic and semiotic, it is a half-opened window on our personal experience and wide-opened on our life, it is not an ideological vision, Utopic, it does not move from the need to invent a new system, it moves instead from the real need to consolidate and give new lymph to established habits of people, and therefore it is a concrete expression of conceptual art at the beginning of the third millennium and  therefore it is the most concrete part of what conceptual art of the third millennium can offer to the tired and worn-out sociology. A simple clothes hanger, an allegory of ideological break-up, is an exemplary image of what contemporary art can elaborate and give back to the sensitive attention of those that will be able to understand and identify themselves in every single element of such alienating break-up.
Massimo Palumbo was born in Casacalenda (Molise) in 1946. In 1972 he obtained an undergraduate degree in Rome. He lives and works in Latina. Since the ‘80s he has been interested in design and visual arts, searching for the relationship between art and the environment, both urban and space. In this context, he promotes the project Kalenarte that is the realisation of a open museum of contemporary art in his native town, which operates in synergy with the Galleria Civica d‘Arte Contemporanea Franco Libertucci in Casacalenda. He collaborates actively with MAD Rassegna d’Arte Contemporanea realised by Fabio D’Achille, with whom he made a personal exhibition “…noi che non abbiamo tetti…” hosted in Teatro Comunale and the Palazzo della Cultura in Latina.  With MAD he participates in MAD Procoio 2011 with the exhibitions “Procoio…orto o scavo?” and “Forconi precari, precari con forconi”.
In a few days he will exhibit his work “mangiamo cultura, con la cultura si mangia…” within Raccolta Manzù in Ardea directed by Marcella Cossu.  This exhibition is composed of trays of bread and books laid on a ribbon in which the artist wishes to express the possibility of growth achievable through cultural feeding and the need for cultural promotion. 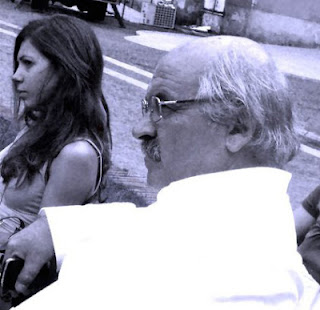